This article first appeared in House & Leisure Online and is entitled “Get reacquainted with nature at Rocherpan Reserve”. Here I’ve adapted my original post slightly in order to make it blog-relevant.

Settled in the coastal scrub between the small seaside towns of Dwaskersbos and Elands bay, Rocherpan is one of the few private reserves that are almost entirely off-grid. Originally part of a large farm, the pan (a shallow area of marshland) was created when the mouth of the Papkuils River was dammed and has been a hotspot for both wetland and sea birds ever since.

Owned by the Rocher family since the nineteenth century, the section of the farm that contained the pan was donated to Cape Nature Conservation in 1966, with the immediate coastal area becoming a marine reserve in 1988. Home to myriad species of bird, the most recognizable being the Greater Flamingo, White Pelican and African Black Oystercatcher, and the reserve also offers eco-friendly accommodation.

Not the average holiday resort, Rocherpan mainly attracts twitchers (bird-watchers) and travellers that value peace and quiet. Cape Nature has also stipulated that loud voices, music and any abrasive behavior will not be tolerated, making the reserve the ideal getaway for those looking to rest and recharge.

Eight chalets, each able to sleep three to five people, are positioned along the beginning of the pan and pointed in such a manner so as to catch the morning sun and the evening breeze. In an often-arid area such as the West Coast, Cape Nature has gone to extra lengths to utilize all resources available to them. Large rainwater tanks, an atmospheric water generator and underground water pumped up by a small wind turbine is used to service the chalets, the swimming pool and the indigenous landscaping whilst solar power provides heat and waterless compostable toilets ensure that almost no water goes to waste. Guests are advised to bring their own drinking water and two dustbins – one for kitchen scraps and one for plastic, paper and glass encourage recycling.

Pleasingly rustic yet with considered finishes, the four larger chalets each offer two bedrooms whilst the smaller cabins offer a more open-plan living space. Every chalet has a private deck with a barbecue, a kitchen with granite counters, gas hob, refrigerator and microwave oven, and a bathroom with a large shower. A large floor fan keeps things cool in summer while a closed combustion fireplace heats up the chalet during the colder months. Industrial screed floors, treated pine and corrugated steel provide an aesthetic that blends harmoniously into the surrounding landscape. Rocherpan is wheelchair-friendly too with interconnecting wooden pathways leading to the cabins and the pool as well as disabled supports in the bathrooms. This detail was refreshing to see, as after spending three months in a wheelchair or on crutches, it’s disheartening how many restaurants, guesthouses and hotels don’t cater to the disabled.

Four bird hides are accessible via a dirt track that runs along the opposite side of the pan and there are two pathways that lead to the beach. An uninterrupted stretch of powdery white sand, the silence is only broken by the repetitive crash of the Atlantic, the call of a kelp gull or the bark of sunbathing seals. As this is a protected area and free of boats, Southern Right whales can often be seen in the spring – an occasion that fortuitously occurs at the same time as flower season.

The pan itself is a seasonal wetland and what with the extensive drought that the Western Cape has been experiencing for the past eighteen months, it is currently dry. However, birdlife is still abundant, although the larger waterfowl have migrated the short distance south to the Berg River mouth in nearby Velddrif. Small bush birds like the Cape Sugarbird, Crested Bulbul, Cape Robin and Bush Dove can be spotted from the comfort of the chalet’s wooden verandah and if one keeps still, a mongoose may scurry into view. In the high summer, dusk is heralded by a dusty pink sky that gradually turns to an inky black speckled with an unimaginable amount of stars. Later, as the fire burns low, one can witness the harvest moon, large as a Swiss cheese and similar in colour, as it steadily makes its ascent into the heavens.

Rocherpan offers a different kind of West Coast holiday – one that is just as beneficial for the environment as it is for peace of mind. 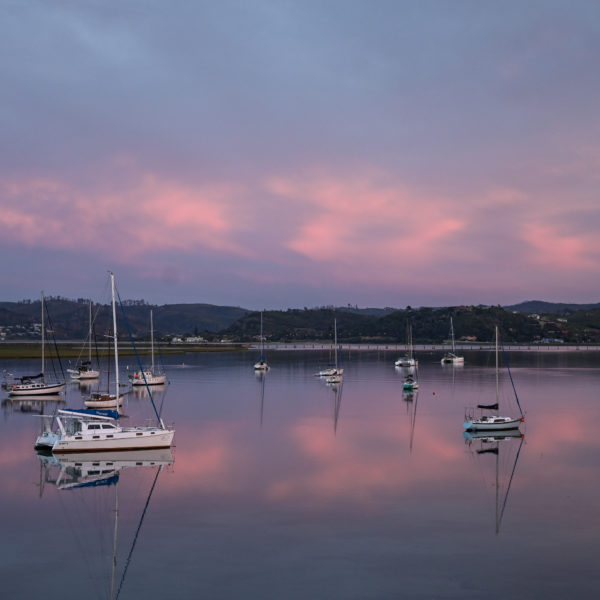 A WEEKEND IN HERMANUS