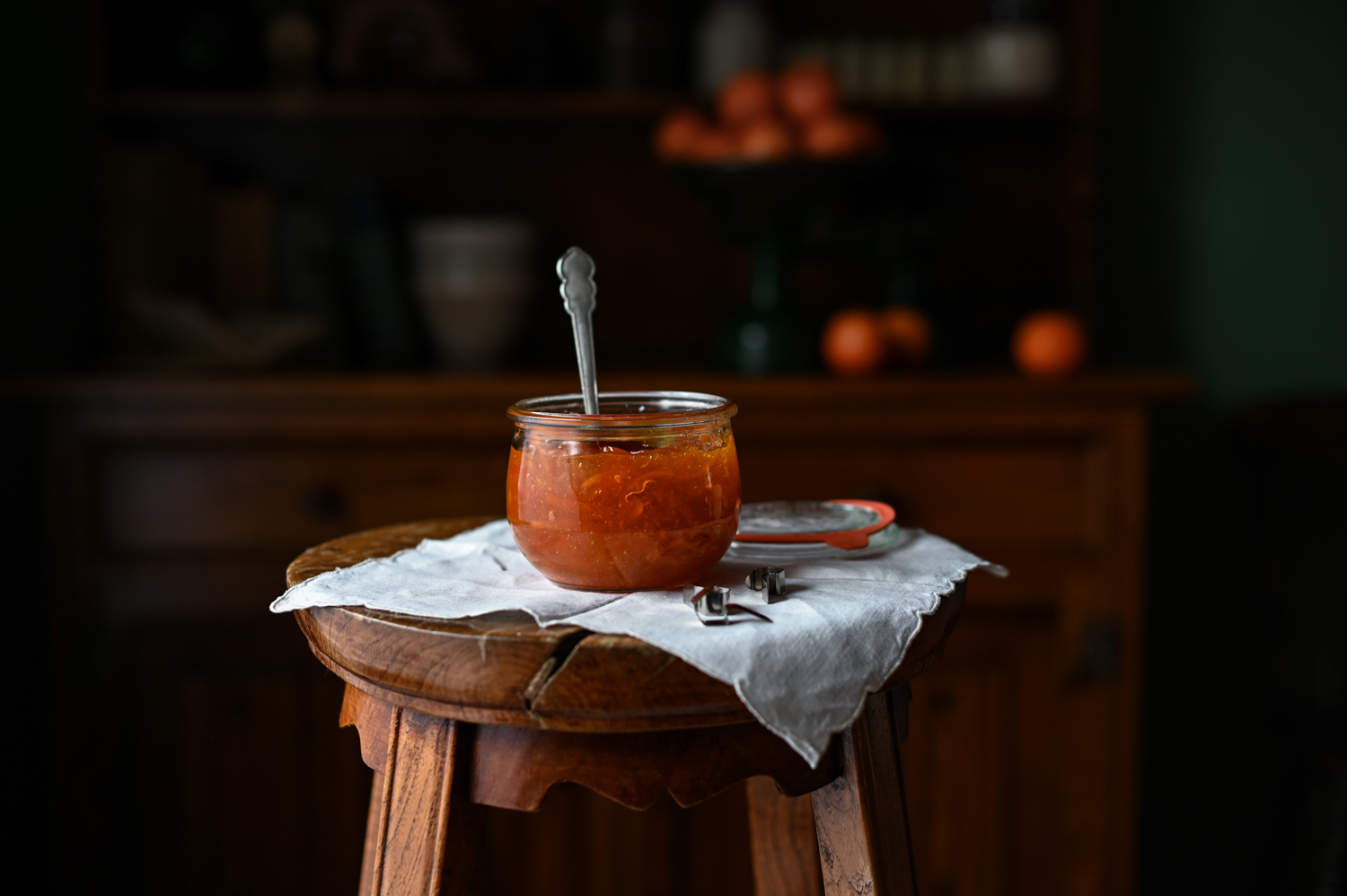 I’ve spent this slow, rainy weekend languidly preparing jars of zesty ClemenGold marmalade from scratch. Using a hint of lemon to counter the sweetness and a few bay leaves for aromatic appeal, the scent of simmering marmalade fills the house with it’s citrusy perfume and I take pleasure in the steadiness of each step – from fruit to jar. After an absolute deluge of rain overnight, it’s wonderful to bask in the morning sunlight – I don’t often allow myself downtime and so each second spent in a state of relaxation is precious.
For me, to take a moment means immersing myself in the calmly comforting act of making food – whether that be a roast chicken or this marmalade. Filling my kitchen with the scent of citrus, preparing marmalade is a labour of love and provides me with time spent alone to dream, inspire and create.

Citrusy but not too sweet, the resulting marmalade brings a little sunshine to winter’s gloom and is delicious spread over hot buttery toast.

It must be from my love for nesting that I enjoy batch-cooking; knowing that at the end of my efforts there will be a shelf in my ever-expanding pantry filled with jewel-bright jars of amber marmalade ready for cakes and marinades but mostly for spreading over hot buttery toast.
In a way I’m bottling this most rewarding of times – citrus season – to relish over in the months to come. A detail that never fails to bring me the quiet contentment I so crave when life gets a little too overwhelming.

I based this recipe on Twigg Studio’s version made with whisky but you can also find my version for whole fruit marmalade here.

Use boiling water to sterilise the jars and leave to dry. Place a side plate into the freezer. This will be used later to test the marmalade’s setting point.

Wash the ClemenGolds and lemons. Halve and squeeze out the juice into a large saucepan, retaining any seeds and pulp. Use spoon to scoop out the remaining pulp and place it into a piece of muslin, along with any seeds. Use kitchen twine to secure the muslin and place it into the saucepan with the ClemenGold juice. Slice the ClemenGold peel into thin strips and add to the saucepan, along with the lemon peel if you prefer a bitter angle to the marmalade. Pour in the water and simmer over medium heat for 30-45 mins or until the rind has softened, taking care not to reduce the liquid too much.

Use tongs to remove the muslin bag and place in a sieve over the saucepan to strain. Add in the sugar and bay leaves and simmer the liquid until the sugar has dissolved. Increase the heat to a boil and cook for 10-15 minutes at a time, checking the marmalade’s consistency in the following manner:

Spoon a drop of the liquid on to a chilled plate. Push the drop with your finger and if it crinkles, the marmalade is ready. If not, continue to boil the mixture. This can often take up to an hour, so both patience as well as a watchful eye on the saucepan are needed.

Once the marmalade has set, leave to cool slightly before spooning into the glass jars and sealing tightly. Once opened, the marmalade will keep in the fridge for up to 3 months.